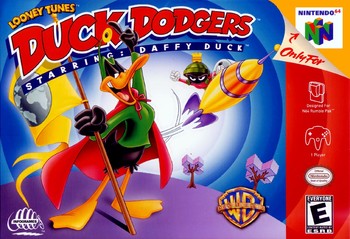 Duck Dodgers Starring Daffy Duck (released as Daffy Duck Starring As Duck Dodgers in PAL regions) is a 2000 video game based on the Looney Tunes franchise released exclusively for the Nintendo 64.

The game is a 3D Collectathon Platformer putting players in control of Daffy Duck under his Duck Dodgers persona, as he is sent on a mission to thwart Marvin the Martian’s latest plan to destroy the Earth. To do this, Dodgers and his eager young Space Cadet, Porky Pig, must travel to several different planets and collect all of the energy atoms that Marvin needs to fuel his weapon before the bad guys can get their hands on them.

It is the second game to be released centered around Duck Dodgers, after Daffy Duck: The Marvin Missions.