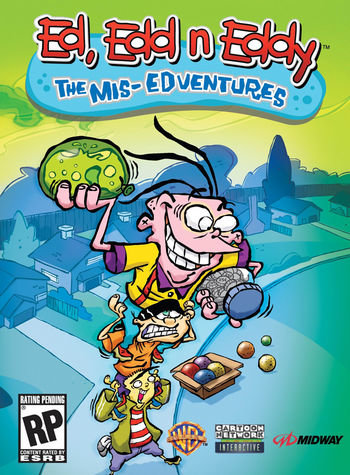 Ed, Edd n Eddy: The Mis-Edventures is an Ed, Edd n Eddy game made by Midway in October, 2005 and the second EENE game, preceding Scam of the Century and succeeding Jawbreakers! The exact genre of the game is hard to place; in the main levels, you mostly switch between the three Eds and use their skills to go through obstacles. The bonus levels, however, are faster-paced and focus on destroying as much as you can.

Rather than a single overarching plot, the game has six normal levels that each are styled like episodes from the show, and each have their own individual stories. The two bonus levels are based off concepts from the episodes "Dawn of the Eds" and "The Day the Ed Stood Still". True to the show, there are no new characters to be found in the game (most of the enemies are animals).