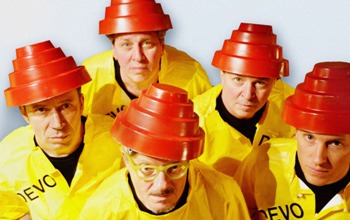 From left to right: Bob Mothersbaugh (Bob 1), Bob Casale (Bob 2), Mark Mothersbaugh, Jerry Casale, Josh Freese
"We thought the things that we'd seen would justify a whole new generation of Bob Dylans or Woody Guthries, and it wasn't happening; instead we were getting disco, and concert rock. Y'know, Foreigner and Styx. Nobody was really talking about the issues, and the arts. We thought, well this is the time for us to do something; to say something. And that's how we began."
— Mark Mothersbaugh
Advertisement:

Greetings, beautiful mutants! And how may we be of service?

Devo (often spelled DEVO or DEV-O), is a new wave/post-punk group hailing from Akron, Ohio. Most people remember them for their red Energy Dome hats and the 1980 single "Whip It", but their catalogue and achievements extend well beyond that. "Devo" stands for "De-evolution", the band's part-satirical, part-serious take on social and political corruption, bigotry, increasing dependence on consumerism and willful surrender of freedom among the common individual (a.k.a. the "spud", or potato, a midwestern staple food). They were formed by Mark Mothersbaugh, Jerry Casale, and Bob Lewis in 1973 partly as a response to the Kent State shootings (which Casale and Lewis personally witnessed).

Their sound, practically from the start, was based on energetic New Wave Music guitar work (largely divorced from Blues Rock tradition) but largely brought the synthesizer to the forefront. This was often in jarring and dissonant ways, especially their early, more experimental years, before they got a record deal. note Those early years, from 1974-1977, are chronicled on the two Hardcore Devo albums. Their vocals are of the nasal "geek" variety, and one of the key things holding the entire concoction together was the precise rhythms played by their original, and most famous, drummer, Alan Myers. Onstage, they make use of visuals and costumes that were and still are outlandish. The band's aesthetic blends futuristic, sci-fi themes with primitive ones, emphasizing the role of modern humans as, in their words, "technologically sophisticated cavemen."

The band went through a couple of incarnations as time passed by; Bob Lewis was edged out of the band shortly before the recording of their first album, and a couple of temporary members were loosely attached to the group in the early days, but in 1976 a consistent core group was established, consisting of Mark Mothersbaugh, Jerry Casale, their respective brothers Bob Mothersbaugh and Bob Casale (Bob 1 and Bob 2) and a drummer, most prominently the late Alan Myers (1976-1985) and more recently Josh Freese (1996-present).

The band had a large part to play in the early days of MTV, since so few bands at the time were making music videos and Devo had jumped aboard the idea well before the market really took off in the 80s. Their first video, in fact, was independently filmed in 1974 and debuted at the Ann Arbor Film Festival in 1976. This film, In The Beginning Was The End: The Truth About De-Evolution, contained performances of a warped semi-cover of "Secret Agent Man" and the Devo manifesto, "Jocko Homo" (featuring the repeated chant "Are We Not Men?", a line borrowed from an early movie adaptation of The Island of Doctor Moreau). The film also introduced two recurring characters in Devo media, Booji Boy - "the infantile spirit of de-evolution", played by Mark Mothersbaugh in a baby mask - and his military father figure, General Boy (played by Mark and Bob 1’s dad, Robert Mothersbaugh Sr).

The band soon attracted the attention of celebrity fans like David Bowie, Iggy Pop, and Brian Eno, the first two having been in the audience at the Ann Arbor festival. They eventually signed with Warner (Bros.) Records in America (which they later regretted) and Virgin Records in England. Their Eno-produced debut album Q: Are We Not Men? A: We Are Devo! was released in 1978; that same year they appeared on Saturday Night Live in yellow jumpsuits and dark 3D glasses, playing "Jocko Homo" and their infamous cover of The Rolling Stones' "Satisfaction". They followed up their debut with Duty Now For The Future in 1979, featuring more songs from their underground years, such as "Wiggly World" and "Smart Patrol/Mr. DNA" (the latter being a six-minute synth-punk fest that only picks up in intensity).

In 1980, they broke through to the mainstream with their third album, Freedom of Choice, which produced the hit single "Whip It" and its accompanying video. The new Devo look included the infamous Energy Dome hats, which were often mistaken for flower pots (although "Weird Al" Yankovic had something to do with that) and gave the general public something to mock (Devo always had the last laugh, though).

Their increased output and touring schedule gave them a few solid years of presence, but there were always setbacks and controversies. Devo became very disillusioned with their record company, who - according to the band later on - only wanted another "Whip It". Their sound also changed from a punk-ish style to a more synthetic style, which didn't help critics' opinions of them. 1981's New Traditionalists and 1982's Oh No, It's Devo! fared only moderately, despite being accompanied by very high-tech and innovative promotional tours: the New Traditionalists tour featured the band on treadmills while Oh, No, It's Devo! brought full background videos onstage, synced with the band's robotic movements. Following that, they were publicly reduced to nothing, and their 1984 album Shout was their last with Warner Bros. and their last with drummer Alan Myers. Myers left after the album was recorded, citing creative deprivation, and he was replaced with drum machines in the studio and Sparks drummer David Kendrick live.

After the band became less active, Mark Mothersbaugh went on to do commercial work and scores for several hit shows, such as Pee-wee's Playhouse and Rugrats, and formed his own music studio Mutato Muzika. Some of his more recent work includes the scores to all of Wes Anderson's films and several blockbuster films including The LEGO Movie and Thor: Ragnarok (both of which relied on Mark's synth-heavy style). Jerry Casale did commercial work as well and directed several music videos, while the other two permanent members Bob Mothersbaugh and Bob Casale joined Mark in scoring. In what the band would later call their own devolutionary period, they recorded two albums with the smaller company Enigma, Total Devo (1988) and Smooth Noodle Maps (1990), both of which went fairly unnoticed, after which the band dissolved in 1991.

The story does not end there, though: Devo reunited and started touring again in 1996, replacing Kendrick with acclaimed session drummer and Promoted Fanboy Josh Freese. That same year the Full Motion Video PC game The Adventures of the Smart Patrol was released in collaboration with Inscape, and it was pretty ill-received. The reunion tour was, however, a success, and Devo would continue during sporadic tours for the next many years to come. In 2006, Devo 2.0, a collaboration project between Disney and Devo, saw the light of day. It featured a band of preteens, playing some of Devo's songs with rewritten Lighter and Softer lyrics, as Disney hoped to peddle the band to a kid audience. The old Devo fans were pretty unhappy about this, and Devo 2.0 never really managed to catch on with their intended audience; when their first album, DEV2.0, tanked, the band dissolved. Devo took it all in stride, musing that the whole affair perhaps was the ultimate proof of de-evolution.

In recent years, Devo has been very active. Other side projects include a de-evolved surf album as "The Wipeouters", a country single as "The Big Dirty Farmers", and a Jerry Casale solo effort as "Jihad Jerry and the Evildoers", playing up the blues influence and rendering a video for "Army Girls Gone Wild." In 2010, Devo made a series of YouTube videos, satirizing the entertainment industry's use of focus groups, in order to promote their ninth studio album. That album, Something for Everybody, was released on June 15, 2010 (after a couple years in Development Hell) and it garnered good reception from fans and critics. In 2013, Devo released a remastered version of Hardcore Devo, which included a couple of previously unreleased demos from their earliest days, as well as Something Else for Everybody, which consisted of the cut songs from Something for Everybody.

Mothersbaugh was also responsible for the score of The LEGO Movie and produced "Everything Is Awesome", which was nominated in 2014 for an Academy Award.

In the past this information has been suppressed, but now it can be told. Every man, woman, and mutant on this planet shall know the tropes of de-evolution:

open/close all folders
A-F
G-L
M-R
S-Z
1. Wear gaudy colors or avoid display
2. Lay a million eggs or give birth to one
3. The fittest shall survive yet the unfit may live
4. Be like your ancestors or be different
5. We must repeat