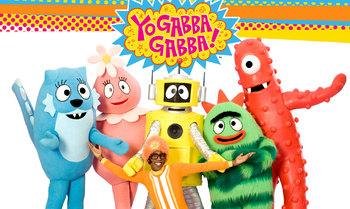 Yo Gabba Gabba! is a kids' show on Nick Jr. with a whole lot of content that doesn't exactly seem oriented towards kids. It was co-created and is written by Christian Jacobs, also known as MC Bat Commander of The Aquabats!, and directed by Matt Chapman, co-creator of Homestar Runner. It ran from August 20, 2007 – November 12, 2015, with a total of 65 episodes over four seasons.

Each episode focuses on DJ Lance Rock's magical toys; Muno, Foofa, Brobee, Toodee and Plex; playing together and learning new things. Their adventures are loosely connected by a single theme, and are separated by trippy filler segments, including:

The series is largely music based, with frequent musical numbers and rhythm-driven activities. Once an Episode the characters watch a music video, with guest appearances by popular indie rock acts like The Killers and Taking Back Sunday. This has helped it build up a Periphery Demographic of college kids.

Yo Gabba Gabba has examples of: