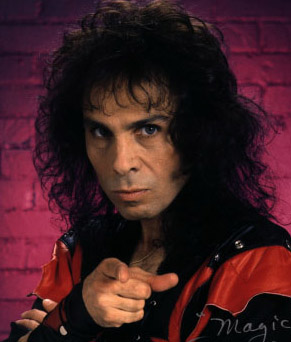 Gaze into the eyes of your new god.
Because even dead gods dream.
"Because Dio taught me, in part, what it is to be a man. Oh, he did not teach the rational lessons: He did not teach me morality, or responsibility, or restraint. No, Stanley, he taught me that being a man means sometimes ruining things in the most extravagant fashion possible. Because you can, and because it's awesome."
— Robert Brockway, For Dio: The Only Appropriate Tribute

Born Ronald James Padavona, Ronnie James Dio (July 10, 1942 — May 16, 2010) was a Heavy Metal musician from New Hampshire. He was well known for his powerful singing voice and popularizing "the horns" hand gesture. He worked with Elf, Rainbow, Black Sabbath, and his own solo band Dio. Near the end of his life, he handled the vocal duties of a reunited Sabbath, under the name Heaven and Hell.

He unfortunately was diagnosed with stomach cancer in November 2009. He ascended into Rock & Roll Heaven on May 16th, 2010, at 7:45 AM after a long and hard battle.

Rainbow In The Tropes :

His solo career provides the examples of:

You thought this was a JoJo-free page about a Heavy Metal musician named Dio, but it was me, Dio!