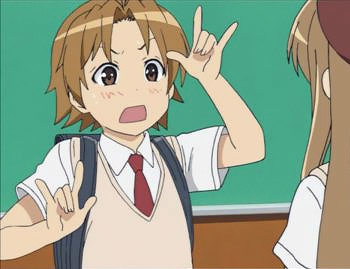 The automatic display of arcane (and presumably protective) finger and hand positions in the wake of a surprising, stunning or physically traumatic experience. Most often this is the mano cornuta gesture — index finger and pinky raised, middle two fingers bent down to meet the thumb. While this gesture has roots in ancient Greece and is used in many societies worldwide, Americans may best know it as "throwing the horns", from its common use at heavy metal concerts (having been popularized in that context by Ronnie James Dio) or as the "hook 'em horns" from University of Texas, with the thumb and pinkie finger extended, to look like longhorns.