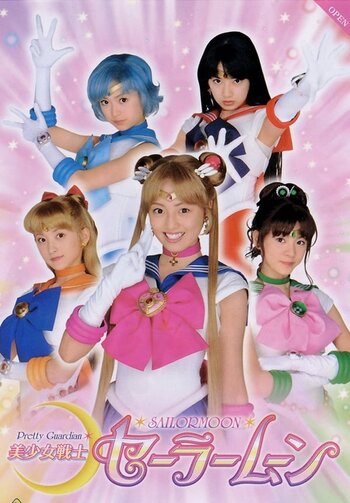 Originally broadcast in Japan between October 2003 and October 2004, Pretty Guardian Sailor Moon was a live-action Tokusatsu re-imagining of the original Sailor Moon manga, announced to coincide with the franchise's 10th anniversary. The first Live-Action Adaptation of the series, it ran for 49 episodes, plus two direct-to-DVD bonus acts that formed a prequel and epilogue. Although it shares the same name as the original anime (Bishoujo Senshi Sailor Moon), it is commonly referred to as "Pretty Guardian Sailor Moon" to distinguish it from other works. (The original translations of the original anime used "Senshi" as Soldier. The current translations of both the new and old anime and manga uses "Guardian".)

The first half is a retelling of the manga's Dark Kingdom arc, in which Ordinary High-School Student Usagi Tsukino (Miyuu Sawai) and four others (Chisaki Hama, Keiko Kitagawa, Mew Azama and Ayaka Komatsu) discover that they are reincarnations of ancient lunar warriors, reawakened in the modern day to fight the evil of the Dark Kingdom. The second half of the show spins off into its own original arc, as the team struggles to balance their friendship, personal lives and responsibilities as Sailor Soldiers, and more sinister details begin to emerge about the disaster that destroyed the Moon Kingdom. In addition, several characters (particularly Minako, Ami and Princess Serenity) got significant overhauls to their story arcs.

A widely-popularised nationwide search assembled a cast of unknowns for the main characters, for many of whom this was their first big acting gig. While the quality of the CG, a few rubber-suit monsters and many combat scenes that resembled dancing more than fighting (a style derogatorily referred to as "Ballet-Fu") expose its uncertain beginnings, all of the staff - from the actors to Toei Animation's CGI artists - gradually grow accustomed to their roles and produce a slow but smooth improvement in the show over time.

The overall direction of the plot diverged into a much darker direction of things only previously suggested, such as the home life and social troubles the girls faced. On the other hand, the show was also known for Mood Whiplash due to its cartoonish sense of humor, which tended to contrast wildly with the more somber scenes.

The ratings were lower than anticipated, and never reached the popularity of the phenomenon that was the anime. This led to the original 52-episode order getting cut down and the ending being rushed as a result. Toei explicitly produced the show with no intention of a release outside of Japan. In spite of that, fansubs abound online, allowing it to reach the rest of the international Sailor Moon fanbase even in the absence of official distribution.

Not to be confused with Toon Makers’ Sailor Moon, the proposed pitch to Toei Animation for live action/animation blend version of the franchise for western television before DiC's dub of the anime came out, which would have strayed even further from the source material. Also not the be confused with the new anime, which is officially titled in English, Pretty Guardian Sailor Moon: Crystal or the recent reprints of the manga which use the Guardian branding rather then Soldier.

See also the entry for Sailor Moon; most of its tropes also apply to PGSM.