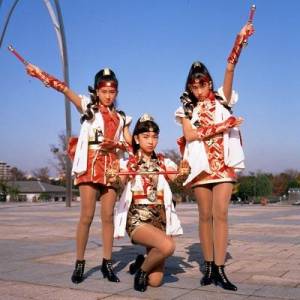 Yuugen Jikkou Sisters Shushutorian is the fourteenth and the last of the Toei Fushigi Comedy Series of Toku shows. It tells the story of three Yamabuki sisters: 16-year-old Yukiko, 13-year-old Tsukiko and 11-year-old Hanako, who, in the year of 1993, seek refuge in a karaoke parlor to seek peace from their constantly squabbling parents who are on the verge of divorce. Then, just as one of the sisters sings a random song, they come face-to-face with a funny-looking man with a red mohawk and dressed in white. It turns out that he is no other than Otori-sama, the Guardian of the Year of Rooster!

Since he is too preoccupied with having fun, Otori-sama (お酉様) gives the sisters a mission: to carry out his duty as the Guardian for the Year of the Rooster for a whole year. With the magic powers bestowed upon them, the three sisters transform into the title Yuugen Jikkou (有言実行, lit. "Will do what they say") Sisters Shushutorian, to fight the evils of this world, with the reward of bringing their family happiness back again. However, should the sisters ever reveal their secret idenities to anyone else, then it would be goodbye three sisters, hello three plump and juicy roast chickens!

As the show progresses, the sisters encounter a wide variety of mostly supernatural foes and eventually a nemesis: Neko-hime, a demonic cat vowing to get revenge on the twelve Guardians of the Chinese Zodiac. The sisters, however, do not fight alone: there is always this guy running around in funny white glasses, white top hat, white suit, white shorts, white shoes, and a jacket which makes Pink Panther proud. He is Fried Chicken Man, who is Otori-sama's messenger, the girl's occasional helper, or simply the show's comic relief. The sister also find three admirers in the form of three photography-loving boys in Hanako's class who just happen to have witnessed the sisters' evil-fighting deeds.