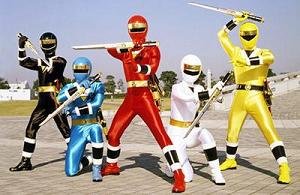 Ninja Sentai Kakuranger (Ninja Squadron Kakurangernote Kakuranger is a portmanteau of Kakure, which means "hidden", and Ranger) is the eighteenth installment in the Super Sentai franchise, airing from 1994 to 1995.

400 years ago, a band of Yōkai battled a group of ninjas, led by the legendary Sarutobi Sasuke. He and four other ninjas sealed the Yōkai away behind a magical door. In the present day, the Yōkai are set free when two of those ninjas' descendants, Sasuke and Saizō, are tricked into opening the door. Now, they and the three descendants of the other ninjas must put the Yōkai away as the Kakurangers.

This is the first Super Sentai with a Ninja motif; its characters are also compared to the leads of Journey to the West. It was also the first Sentai to feature a female as its leader and the first to have a non-human ally as a Sixth Ranger. Part of its charm is the distinct Postmodernism feel it has - the Narrator, and later the Youkai themselves, make a point of introducing their past selves directly to the audience, whilst being characters in the show, for example.

It was adapted into America as the third season of Mighty Morphin' Power Rangers. Notably, the suits were used for the Aquitian Rangers, who protected the Earth during the "Alien Rangers" story arc when the Mighty Morphin team was de-aged.

The series itself was the third Super Sentai to see a US release in May of 2016. It can be streamed for free at Shout! Factory TV