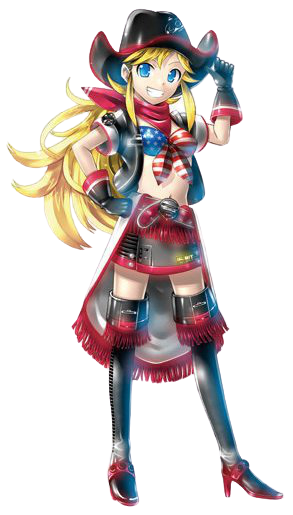 You really can't get more American than that.
"See? You can tell he's American from his blond hair and cowboy hat!"
— JesuOtaku on a side character from Digimon Tamers
Advertisement:

Americans who tend to forget that the rest of the world exists often, when they remember, stereotype everyone else by their headgear. They will indicate that a character is Mexican by simply slapping a sombrero on their head, giving a Russian character an ushanka, a French one a beret, a Brit a bowler hat, an Irish a green top hat, an East or Southeast Asian a rice hat, a South Asian or Middle Easterner a turban, and a Native American either a feathered headband or full-on feathered headdress. So what, one might wonder, is the stereotypical hat that other countries associate with America? Well as it turns out, a cowboy hat.

In foreign media, Americans are often portrayed either as cowboys or dressed so similarly to an archtypical cowboy that it makes no difference. Expect a ten-gallon hat, button-up shirt, jeans, boots and maybe a vest, poncho or duster for good measure. Apparently in Eagleland, The Wild West never quite ended. Might be a trigger-happy Gun Nut too.

This is a case of Small Reference Pools, where America has become so synonymous with cowboy culture that people overseas use it to characterize the entire country. This is, of course, partially Truth in Television: The Western is a distinctly American genre (unless it's a Canadian Western), and a lot of stereotypical cowboy traits are also stereotypes of Americans as a whole. Plus, cowboy fashion and culture is still idealized in certain parts of America, particularly in rural areas (especially in western states), and in Country Music. In fact, Americans from these regions are frequently stereotyped this way by other Americans; what this trope categorizes as a stereotypical American would, for example, be recognized by most actual Americans specifically as a stereotypical Texan or more broadly as a stereotypical southerner.

See Eagleland when talking about personality, and an "Ugly American" Stereotype may combine both by wearing a cowboy hat abroad. Wearing a Flag on Your Head is another stereotypical American fashion, though it's by no means restricted to them. When talking about hair/eye colors, see Phenotype Stereotype. Sexy cowboy and cowgirl costumes may be a part of a Gorgeous Gaijin. If the character identifies more for being a Texan than an American, see Everything Is Big in Texas.