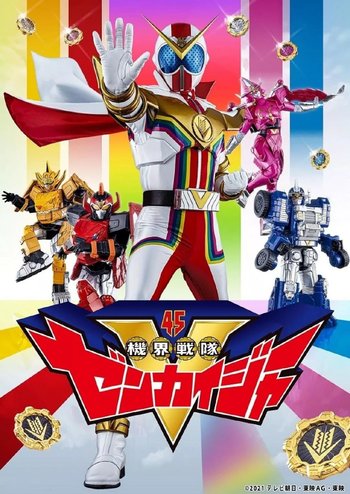 Kikai Sentai Zenkaiger (roughly translated as "Mecha-World Squadron Full Throttle-ger") is the 45th program in the Super Sentai franchise and the third entry of the Reiwa Era. It began running alongside Kamen Rider Saber on March 7, 2021, following a prelude movie triple-billed with that of the Mashin Sentai Kiramager and Kishiryu Sentai Ryusoulger movies on February 20. It is the 45th anniversary season and the second crossover Sentai season after Kaizoku Sentai Gokaiger.

The Super Sentai exist in multiple parallel worlds. One of these worlds is Kikaitopia, a once-peaceful land of Ridiculously Human Robots called Kikainoids, now under the tyranny of the Kikaitopia Dynasty Tojitendo, who seek to lock up all the other worlds in order to rule over The Multiverse, with Earth being their last target. To prevent this and save the worlds already dominated by the Tojitendo, Kaito Goshikida, a young human whose parents went missing after discovering The Multiverse, teams up with four rebelling Kikainoids to face them. Harnessing the powers of all 45 Super Sentai, they transform into the Zenkaigers, fighting at full-force, full-throttle!