Manga / Aim for the Ace! 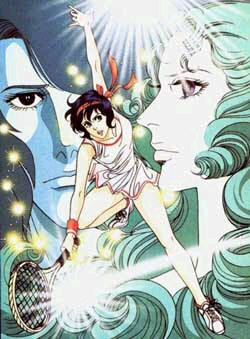 Aim for the Ace! (エースをねらえ!, Ēsu o Nerae!) is a classic Shoujo manga created by Sumika Yamamoto, which ran from 1973 to 1980 in Margaret. It was later adapted into an anime in 1973. Highly influential to shoujo, it had several series throughout the 70's and 80's and a live-action movie in 2004. It has been dubbed and distributed in Europe, in French, Italian, German and Spanish.

The story focuses on Hiromi Oka, who is an ordinary high school girl whose one wish is to be as good at tennis as the girl who is best in the school, the graceful "Madame Butterfly" Reika Ryuuzaki. Her coach Jin Munakata sees potential in her, and the rest of the series tells of her struggles and victories, on and off the court.

There was also a 1979 animated movie, which has higher quality animation, since movies have a higher budget than a TV series.

The first TV series note  the 1978 remake on the other hand was directed by Minoru Okazaki as Dezaki was busy with Treasure Island , as well as the movie and the OVA's were directed by Osamu Dezaki, who directed many classic anime including Tomorrow's Joe, The Rose of Versailles, and the OVA's for Black Jack.

GunBuster starts out as an Affectionate Parody of this series before evolving into its own thing.

Aim for the Ace! provides examples of:

Alternative Title(s): Aim For The Ace