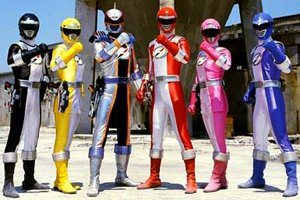 "Adventure for Treasure, Boukenger!"
"Even today, there are those who risk their lives to adventure.
They overcome all troubles to secretly protect dangerous treasures.
Adventurers!"
Advertisement:

GoGo Sentai Boukenger (Rumbling Squadron Boukengernote A combination of bōuken (adventure) and "ranger") is the thirtieth program in the Super Sentai franchise, airing from 2006 to 2007.

SGS ("Search Guard Successor") is a private philanthropic organisation dedicated to the preservation of historical artifacts and treasures. The most dangerous of these relics, possessing powers beyond that of modern human technology, are designated as "Precious".

To stop these artifacts from falling into the wrong hands, SGS have created the GoGo Sentai Boukenger: an elite team of Adventurer Archaeologists who channel the spirit of adventure as they search the four corners of the globe for the mythical Precious. Opposing them are the "Negative Syndicates", a designation that SGS gives to any hostile organisation that seeks to misuse the Precious for their own ends.

Boukenger is based mostly on treasure hunting and the tales based on it as well as bringing some unique ideas to forefront such as different villain factions. There is also a bit of a personality change between the Pink and Yellow members as explained below.

Partnered with the Kamen Rider series Kamen Rider Kabuto before concluding its airing alongside the first episodes of Kamen Rider Den-O in the Super Hero Time block.

It should be noted that every mecha and villain, from the lowest mook to the biggest bad, is a Shout-Out to various Humongous Mecha from prior Super Sentai shows.

Adapted for US audiences as Power Rangers Operation Overdrive.

The Gordom Civilization, Jaryuu Clan and Dark Shadow are classified as "Negative Syndicates" by SGS. While each has a differing modus operandi, all have malicious goals regarding the Precious.

The Gordom Civilization, Jaryuu Clan and Dark Shadow are classified as "Negative Syndicates" by SGS. While each has a differing modus operandi, all have malicious goals regarding the Precious.