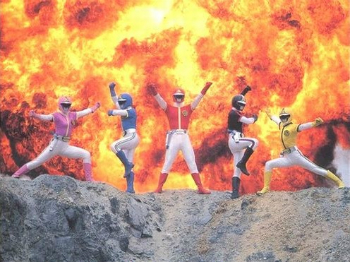 In case you haven't noticed, there's a lot of explosions in this one...What, you thought Dyna didn't mean anything?Answer It's short for 'dynamite'. Get it now?
Bakuhatsu!note Explode! Kagaku Sentai! Dynaman!
Advertisement:

Kagaku Sentai Dynaman (Science Squadron Dynaman) is the seventh Super Sentai, which aired from 1983 to 1984. It was the first to utilize spandex suits.

It begins when Hokuto Dan, a kendo master and an inventor, received an invitation from the famous Dr. Yumeno. On the way, he witnesses a strange creature attacking innocent people. He attempts to help; along the way, he encounters other inventors that also received similar invitations: fencer Rei Tachibana, swimmer Yousuke Shima, cowboy Kousaku Nangou and later ninja Ryuu Hoshikawa. While they are able to fend off the strange creatures, the creatures overwhelm them and throw them out to sea. However, they survive and make it to the place where Dr. Yumeno resided... a Kindergarten.

The Kindergarten soon turns out to be the Yumeno Invention Center in disguise. Yumeno called them because he had sensed the rise of the Jashinka Empire, the forces that attacked the five on the way to the invention center. The only force that can stop them is the Science Squadron Dynaman, and these five are the chosen warriors! Like their predecessors, they don't have second thoughts to the prospect of becoming allies of justice and immediately agree to Dr. Yumeno's offer. Thus, the Dynamen's battle against the Jashinka Empire begins!

This Sentai's best known for actually being the first to reach American airwaves. Before there was Mighty Morphin' Power Rangers, this show actually received a Gag Dub by the Americans on the USA Network. It was very silly, but fun in its own way. As episodes were included in the compilation series Special Delivery, it's also the first to air on Nickelodeon, beating Samurai by over 20 years.

As they both share a common enemy in Emperor Aton, the power-hungry General Zenobia and mysterious Dark Knight join forces.

As they both share a common enemy in Emperor Aton, the power-hungry General Zenobia and mysterious Dark Knight join forces.