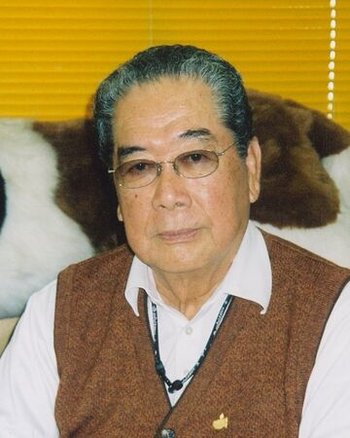 Tōru Ōhira (September 24, 1929 – April 12, 2016, aged 87) was a seiyuu and actor who has been with anime since the beginning. Literally. Beginning in the early 60s as a narrator, most of his modern roles had him pigeonholed as characters with short tempers, usually of the hammy (and corpulent) variety. One exception was his performance as the dub voice of Darth Vader in the prequel trilogy of Star Wars movies and edits along with Soulcalibur IV, although needless to say, he makes Vader in Japanese sound rather hammy (and corpulent)

As far as Western counterparts go, although Tōru Ōhira's most famous role was originated by James Earl Jones, his career appears to have more in common with that of Fred Tatasciore or BRIAN BLESSED himself. (Sorry, Wakamoto).