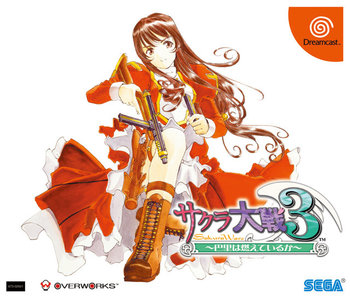 Under the Imperial Flag of Love.
Advertisement:

Sakura Wars 3: Is Paris Burning? is the third installment in Sega's Sakura Wars series and the first of two video games developed by Overworks for the Sega Dreamcast. Originally released in 2001, the game has since been ported to Windows computers in 2004 and the PlayStation 2 in 2005. This was also the first of two games to feature in-game 2D sequences from Daume.

Two OVA series were also made, both produced by Radix. The first, École de Paris, was released in 2003 and focuses on the combat revue's exploits before and during the early events of Is Paris Burning?. The second, Le Nouveau Paris, was released from 2004 to 2005, and picks up shortly after the events of the game.

Is Paris Burning? contains examples of: