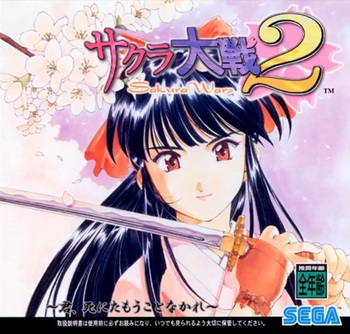 Sakura Wars 2: Thou Shalt Not Die is the second installment in Sega's Sakura Wars series, the first game in the series to involve Production I.G (with Bee Train as assistants) and the last Sakura Wars game on the Sega Saturn. First released for the Saturn in 1998, it has since been ported to the Sega Dreamcast in 2000, as well as Windows computers from 2001 to 2007 and the PlayStation Portable in 2006 along with the first game.

One year after their battle with Aoi Satan and the Hive of Darkness, the Imperial Assault Force's Flower Division is called into action once again to fight the Black Demons, a new evil force that threatens Tokyo. Along the way, the Flower Division gains two new recruits, the Japanese-Italian actress Orihime Soletta, and the German tactical wunderkind Leni Milchstraße.

The game featured improved battle and dialogue functions, which expanded the CD-ROM disc size from two to three. It also introduced two modes for the LIPS system: Timing LIPS (in which an option is removed or added depending on the wait time) and Double LIPS (in which you have to do certain sequences within an extended time limit).

The game subsequently released in Russian for the PC for Russia and Russian-speaking countries/territories.

Thou Shalt Not Die provides examples of: