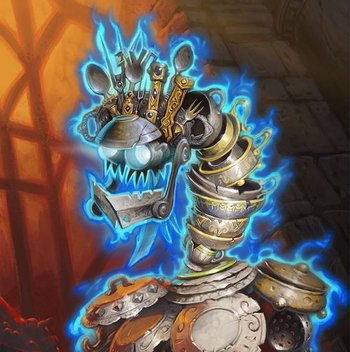 Hey! Is that my favorite mug?!
"This is a golem made out of the remains of a collapsed mineshaft, complete with broken support-beam arms and legs, and the howling souls of the miners who died trapped inside it. Also, a pissed-off zombie canary. It just goes to show that some people will make a golem out of anything."
— Collapsed mineshaft golem

Crafting a proper Golem takes time, effort and often magical runes. However, in a pinch, many bad guys can take whatever is at hand, make it into a useful shape, and sent it off against their enemies. Things like water, sand, dirt, snow may be used, often illustrating that the creator can easily make more if they are destroyed.

Closely linked to summoned creatures, although in this case its only really the "binding force" that has been summoned/created.

Distinct from Golems and Snowlems in that they are (often)