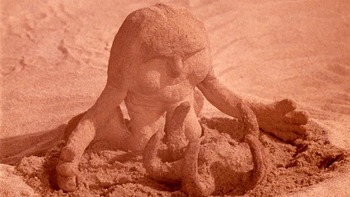 The Sand Castle is a 1977 animated film directed by Jacobus Willem "Co" Hoedeman and produced by the National Film Board of Canada.

Somewhere there is a sandy place—beach? Desert? One day after the winds stop blowing the sand around, a humanoid sand creature rises up out of the sand. He then creates some companions out of sand, all of which come to life: a snake, a piglet, and odder creations like a weird three-legged duck-type thing. Once he has finished making his little band of friends, the sandman draws some plans in the sand. All the creatures work together and build a sand castle according to the sandman's plans...but then the wind blows up again.

You can see it on the NFB's Youtube channel here