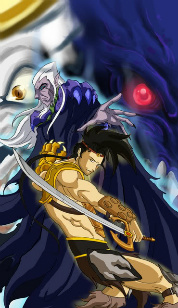 "Unleash The Beast Within"
Advertisement:

is a fantasy manga-styled webcomic by Indian creator Jazyl Homavazir, that follows the exploits of Xeus, a prince forced to flee his homeland when it was attacked by the Evil Shadow Nexus under the command of the Warlock, Dragos. After seven years Xeus must now set forth on his quest to free his homeland from the forces of Darkness by mastering an ancient power of the Beast Transfers. The comic follows Xeus's quest as he makes new allies and battles a Plethora of villains with similar traits to save his homeland from impending chaos.

It is also the winner of the First ever Comic Con India Award for Best Webcomic.