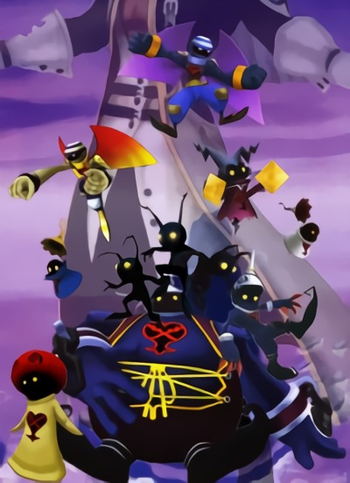 The Big Bad has arrived, and he has with him, a teeming army of...tiny cuddly wuddly Mooks who nonetheless do his bidding.

Instead of using your typical Faceless Goons, the Big Bad instead employs an army of adorable, mostly-harmless creatures who are only a threat via full on Zerg Rush, which is OK, since he does have a rather large army of them.

A Hand Wave is usually given, that these adorable minions are simply practical due to being easy to produce (if they are artificial beings or reproduce rapidly), work for practically nothing, or are enslaved.

Expect them to be fairly incompetent, and Hilarity Ensues whenever they are left on their own. Despite knowing they're hardly dependable, expect their employer to moan at least once about how he's "Surrounded by Idiots". When they do prove to be quite dangerous after a fashion, this trope shifts to Killer Rabbit.

Cool hats and various costumes are a frequently seen method of making these guys even more cute.

Has a good chance of being a Waddling Head. Frequently overlaps with Mascot Mook and Cute Slime Mook. Compare Cute Is Evil.

Yellow Diamond's Ruby Squad are portrayed as loyal, but too dumb not to notice.

Yellow Diamond's Ruby Squad are portrayed as loyal, but too dumb not to notice.