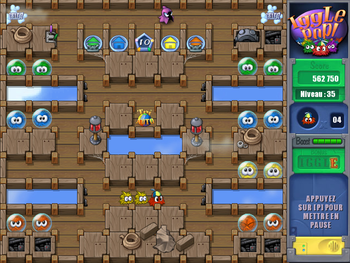 Go, Fizzy! Save you Iggle brethren!
"Iggles everywhere are being trapped in some kind of bubble cages! You must save them!"
— Doctor Iggle
Advertisement:

Iggle Pop! is a casual game developed by PopCap Games in 2004. It is a Maze Game where you play as fuzzy little creatures called Iggles, which must save their brethrens from the evil (and adorable) Zoogs. They are aided by a bespectacled scientist called Dr. Iggle, which creates uselful items to help the player getting the other Iggles to safety.

Gameplay-wise, the player must free coloured Iggles (that come in green, orange, yellow and blue) from their bubbly prison and bring the to colour-coded teleportation tiles, while patrolling Zoogs try to kill you and emprison the Iggles again. The level is over when all the Iggles are safe!

There are five playable characters: an orange young male Iggle named Fizzy, his energetic little sister Dizzy, the doctor's teal assistant Rizzo, a tall brown Iggle wearing a tie named Bozz and Dr. Iggle himself. The player must explore five worlds while gradually learning the reason why the Zoogs are capturing the poor fluffy Iggles...

This game provides examples of!: