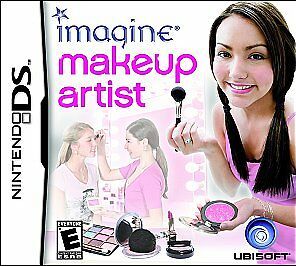 Imagine Make Up Artist is from the Imagine series of games for the Nintendo DS that are aimed at young girls. It's basically an adapted port of Cosmetic Paradise, a game that originated in Japan, the only main difference is that it doesn't use anime like graphics. Cosmetic Paradise was also heavily criticised for the fact that every single client wanted to be made over to impress a boy they liked; Imagine Make Up Artist has it so that each client has different reasons for being made over.

You take the role of a young girl who has come to study make up at the Make Up Manor, which is ran by a pair of twins called Alex and Alexis. Gameplay will depend on what day it is; weekdays are spent either helping clients with Alexis, or learning make up techniques with Alex. You are also helped by Niko, a cute white.. thing who introduces you to various jobs around the city and cheers you on from the sidelines. You then later meet Victoria, who becomes your rival during the various make up contests throughout the year. Weekends are usually free time, and can be used for going shopping, doing other jobs on the side for gems, or going on dates.

The aim of the game is to obtain your 'Pro License' after a year of studying through a exam that will test you on everything you've learnt throughout the year.

Tropes in Imagine Make Up Artist include: