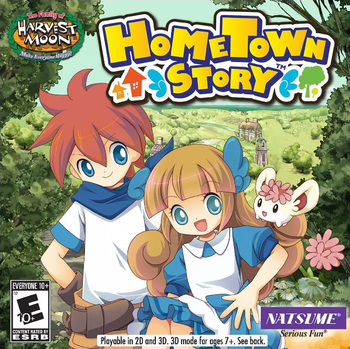 Hometown Story is a 2013 Simulation Game developed by Toybox and published by Natsume. It takes place in the same universe as its sister series, Harvest Moon, but otherwise is very different.

A major difference between the two is you inherit a store instead of a farm. It starts out small and your long-term task concerning it is to expand it so you can have more customers and encourage more people to move into town. It also focuses less on romance and more on general bonding than the recent Harvest Moon titles. While the latter sometimes had limited or inexistent benefits to befriending non-bachelors/bachelorettes, here befriending all named characters is just as necessary to get new items to sell and new people to move in as running a profitable business. There is a catch to this, however: your store is perpetually open from 6 AM to midnight, so you have to find a balance between manning the store and exploring the town to get new stock and befriend your new neighbors. Some game progression events are rewarded with blue feather fragments. With every seven collected, you get a full blue feather you can use to make a villager's wish come true.