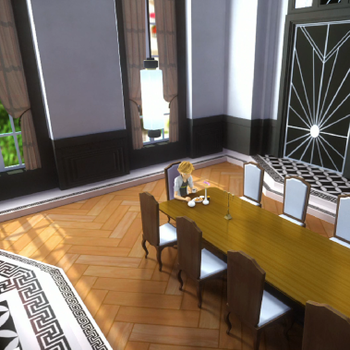 It's not much fun having that big table when there's no one to share it with.
"I was a rich, only child who got anything I wanted... as long as I behaved... and sat still... and didn't speak unless spoken to..."
— Mai, Avatar: The Last Airbender
Advertisement:

If a character is between the ages of 18 to 21 or younger, and their parents have a lot of money, it's very likely the character has these problems:

This one-two punch serves up a lonely kid, one with resources. Unhappy kid + money = trouble, more often than not.

Compare/contrast Spoiled Sweet (whose parents are not distant, but they shower them with love and pamper them instead, and they also have an abundance of friends), Spoiled Brat, Lovable Alpha Bitch, and Heartwarming Orphan. May overlap with Disneyland Dad where an often absent parent tries to make up for it by buying their child really nice gifts or paying for trips to fancy or expensive places. Compare Gilded Cage.