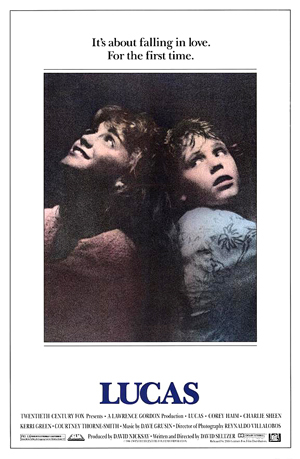 Lucas Blye (Corey Haim) is a nerdy 14-year-old kid who, due to his high intelligence, was advanced up a few grades and is currently attending high school in a Chicago suburb. He meets Maggie (Green), an older girl who just moved to town, and the two become the best of friends over the course of a summer. Cut to the beginning of the school year, and Lucas has become infatuated with Maggie, who — to his dismay — soon develops her own crush on Cappie Roew (Sheen), a senior and captain of the football team who acts like Lucas's bodyguard.

The film was well-received by critics (notably by Roger Ebert, who gave it a very glowing review), but bombed at the box office. It has gained a cult following over the years, however.

Not to be confused with Lucas. Compare with Angus, another coming-of-age film centering around a social outcast.