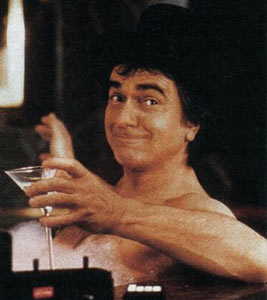 Arthur (1981) is the story of Idle Rich Arthur Bach (Dudley Moore), who comes from a wealthy family, and as such, he has never really had to grow up. He spends most of his time drinking and just generally enjoying himself. His father disapproves of his behavior, but is willing to continue to bankroll his son's activities as long as he goes through with the arranged marriage that he has set up for Arthur. The problem is, not only is Arthur not in love with his fiancee, he's just found love with a working-class girl (Liza Minnelli) from Queens. Hilarity Ensues as he tries to live his life his own way without getting cut off from the money.

A box-office sensation, this Romantic Comedy was the biggest solo success of Dudley Moore's career, and Sir John Gielgud, one of the most respected stage actors of the 20th century, won an Academy Award for his role as Hobson, Arthur's valet. Burt Bacharach scored the film, and "Arthur's Theme (Best That You Can Do)" won the Best Original Song award and made it to Number One on the Billboard Hot 100. The film was followed by an unsuccessful sequel (Arthur 2: On the Rocks) in 1988, which picks up the story four years later.

And while it has nothing to do with an entirely non-canonical animated series, it is the nearest thing we're ever likely to get to a P. G. Wodehouse adaptation in the top-ten grossers of the year department.

Remade in 2011 with Russell Brand in the title role and a Denser and Wackier tone.