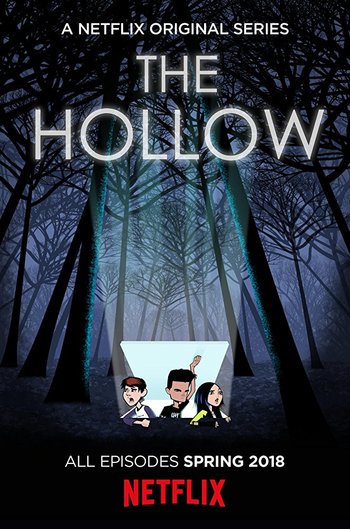 The Hollow is a Netflix original animated series created by Vito Viscomi.

Season One follows three teens who wake up in a closed room with no memories. After relearning their names from strips of paper in their pants and bit of puzzle solving with a typewriter, the trio (Adam, Mira, and Kai) manage to escape the enclosed bunker... only to find that they're just as clueless about the world outside it. As they travel through mysterious lands and meet a number of strange beings, the group endeavors to figure out just who they are, what they are, how they got there, and (most importantly) how to return home, whatever that may be. The first season premiered on June 8, 2018.

Season Two begins with our heroes awakening with all their memories intact and everything appearing normal. Well, other than the fact that despite the events of the previous season, they're all still trapped within the depths of The Hollow. After reuniting with each other, Adam, Mira, Kai, and their former rivals must all work together and use the knowledge gained from their previous journey to locate the Weird Guy and figure out how to truly return home... though they may find the answer to be stranger than they ever imagined. The second season was released on May 8th, 2020.

In September of 2020, it was announced Netflix had not renewed the show for a third season