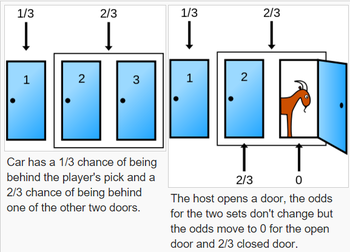 "If the host is required to open a door all the time and offer you a switch, then you should take the switch, But if he has the choice whether to allow a switch or not, beware. Caveat emptor. It all depends on his mood.
My only advice is, if you can get me to offer you $5,000 not to open the door, take the money and go home."
—Monty Hall, July 1991
Advertisement:

A classic mathematical problem involving probabilities. The basic form is based on one of the games on the Game Show Let's Make a Deal. The contestant is offered the choice of opening any one of three doors to claim whatever is behind the chosen door. One door has a car behind it, the two others hide goats. The contestant chooses a door. The host (who knows what is behind each door) then opens one of the two other doors, revealing a goat. The contestant is then offered the choice to switch to the unrevealed door or stick with their original decision. The correct answer is to switch, as the probability is 66.7% that the car will be behind the other door. This is because there was a 2 in 3 chance that you chose a goat originally, and switching will always get you the opposite of what you initially picked. The host isn't providing any new information, since he can always open a door with a goat. See The Other Wiki for an explanation of the math

. Note that this number is true only if the host is required to reveal a goat and then offer the contestant the choice to switch. See The New York Times

for what happens when the host is not.

Named after the longtime host of Let's Make a Deal. It causes a surprisingly large Flame War cascade when mentioned. Even the initial article in 1990 by Marilyn Vos Savant got a pre-internet version of this: a lot of people (including a lot of math professors) wrote in saying she was wrong and it didn't matter if you switched or not. It turned out she was correct after all, as demonstrated by this table.

This problem is often presented with a flaw where the question does not include the notion that the host will always reveal a goat, as opposed to revealing either of the unpicked doors at random. If he does pick at random then you do gain new information when a goat is revealed, because it might not have happened; the chances are then 50% that the car is behind each remaining door. One reason why many people give the wrong answer to the original problem is subconsciously confusing it with this version. Especially egregious examples may not include the notion that the host will always give the player the opportunity to switch at all, allowing for the possibility that the host only allows you to switch if you pick the car (in which case switching gets you a 100% chance of getting a goat).

How it worked out on the show is irrelevant, especially since Monty Hall himself in this interview

denies that he ever actually did this deal. That said, he tested it out in 1991 and showed that while the Monty Hall Problem applies to many things, it didn't apply to Monty Hall.

Not to be confused with Monty Haul, which is a different problem altogether.