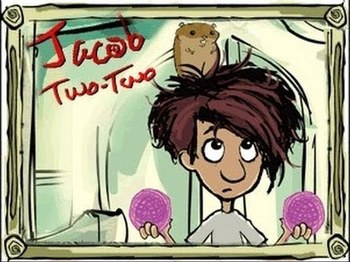 Jacob Two-Two is a Canadian animated TV series produced by the Canadian animation studio Nelvana (with 9 Story Media Group handling animation for the final season) that aired on YTV. It is loosely based on a series of children's books created by the late Jewish-Canadian author Mordecai Richler.

The central character of the show is the eponymous Jacob Two-Two, an elementary-aged boy from Montreal, Quebec whose nickname "Two-Two" derives from how he often says things twice because nobody ever hears him the first time. The reason for this is that Jacob is the youngest in his family, with four older siblings (obnoxious twins Noah and Emma, bratty teenage sister Marfa, and aloof eldest brother Daniel) who frequently push him around. Meanwhile, Jacob's father Morty is an accomplished author while his mother Florence looks after the household.

While Jacob can always count on his parents (and his next-door neighbor and secret international spy X. Barnaby Dinglebat) when he needs help, things are different at school. There, Jacob deals with the antagonistic school staff, including the cruel and gluttonous headmaster Principal I.M. Greedyguts, his bitter-hearted teacher Miss Sour Pickle, and the unscrupulous janitor Leo Louse. Fortunately, Jacob also has his friends by his side, local oddball Buford Pugh and snooty Quebecer Renée Ratelle.

And given how vivid and chaotic his everyday life is, Jacob always finds some form of adventure to be had around Montreal, from meeting famous wrestlers and getting back confiscated items from the school's vault to playing in hockey games and investigating neighborhood conspiracies. And while Jacob might be the runt of his family and rarely taken seriously by most, his big heart and determined attitude means that this little underdog can always find ways for things to work out for him - even if they're not always as he hoped for!

The series debuted in 2003 and ended in 2005 after running for 62 episodes over 5 seasons. In the United States, the show was a staple of Qubo (one of the series the channel launched with, actually) until 2017. Nowadays, Nelvana has all the episodes up at their Keep It Weird channel on Youtube. You can check them out here