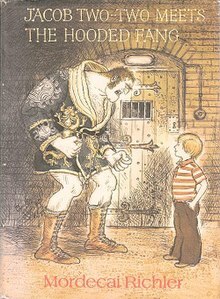 Jacob Two-Two is the eponymous protagonist of a series of children's books created by the prolific Jewish-Canadian author Mordecai Richler. He is a young boy from Montreal, Quebec whose father is an accomplished author. He gets his nickname "Two-Two" because he often has to say things twice to be heard by his family, due to being the youngest of five children. But despite his runty status, Jacob always finds adventure to be had with his friends and around Montreal, from meeting famous wrestlers to befriending living dinosaurs.

The first book Jacob Two-Two meets The Hooded Fang was published in 1975. Two more books Jacob Two-Two and the Dinosaur (1987) and Jacob Two-Two's First Spy Case (1995) were later published before Mordecai Richler died in 2001. However, a fourth book called Jacob Two-Two on the High Seas was released in 2009, which was conceived by Richler shortly before his death and completed by Cary Fagan with support from the Richler family.

There have also been a few adaptations of Richler's work. Jacob Two-Two Meets the Hooded Fang has been adapted to film twice (pun not intended) in 1978 and then 1999. Additionally, an animated TV series produced by Nelvana loosely based on the books debuted in 2003 on YTV, with the books even getting a republishing that same year with new illustrations to match the show's animation style.