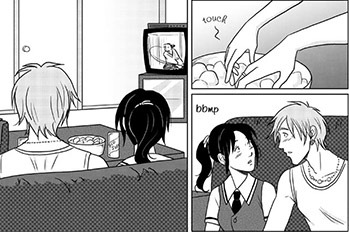 An Accidental Hand Hold occurs when Alice and Bob reach for the same item and find themselves holding hands instead. This can lead to Alice and Bob instantly letting go, pretending the incident never happened or letting go in disgust with A or B looking sad. Sometimes, Alice and Bob blush, knowing that they're holding hands, but don't act on their feelings. If they're lucky, Alice and Bob can turn to each other, before leaning in and kissing.