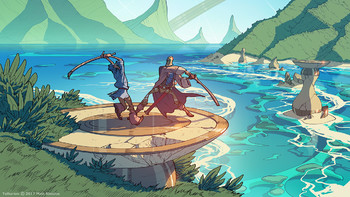 is a fantasy webcomic about a guy, a girl, a robot, and a quest for an ancient sword, all told without words. The Robot saves the Guy's life, and the two begin travelling together, eventually adding to their posse and gaining momentum for the Quest to find the sword. Their world is surrounded by a great mechanical apparatus that provides both sunlight and moonlight, and is filled with ancient carvings and ruins hinting at an ancient and sophisticated society that ruled the world long ago.

, the story is expressed through digital paintings without any dialogue and containing no written descriptions.