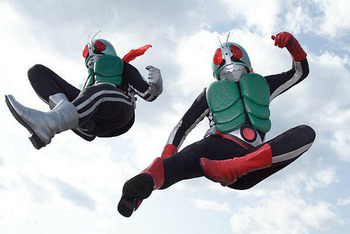 RIDER DOUBLE KICK!
"Simple. Dive into the air with the Dive Button and time your descent with the Kick button."
— Narrator UltraDavid explaining how to Dive Kick, in the trailer for

the game of the same name.
Advertisement:

Often seen in Japanese media, this is an attack in which a character jumps really high up into the air and dives foot first from above, usually with the right foot out forward with the left leg curled up inward to gain momentum.

Popularized in the famous tokusatsu franchise Kamen Rider, and popular enough to be seen as a Signature Move of most, if not all, of the Riders seen throughout that franchise, in which it's called a "Rider Kick". If this trope appears in Japanese media, chances are good that it's an Homage to Kamen Rider (especially if they shout "(insert name here) KIIIIIIIIIICK!!" while doing it).

One variation is when two or more characters team up to make a more powerful version of the move.

See also Dynamic Entry and Slide Attack. Not to be confused with Divekick, a Fighting Game that plays with this trope.