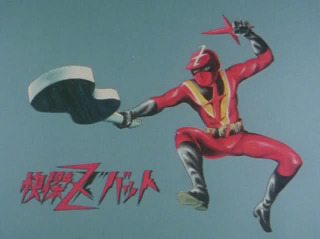 Kaiketsu Zubat is a 1977 Toku series created by Shotaro Ishinomori. It follows the tale of detective Ken Hayakawa, whose friend Gorou Asuka was murdered by the evil organization Dakker. To avenge him, Ken dons the mighty Zubasuit to become Zubat.note Alternatively romanized as "Zvatt". Apparently, the sound of something zipping by in a flash. Our hero roams the countryside, like a good ol' western gunslinger, to find Dakker criminals wherever they're terrorizing the innocent.

Not to be confused with that Goddamn Pokémon, or Kaiketsu Zorori for that matter.