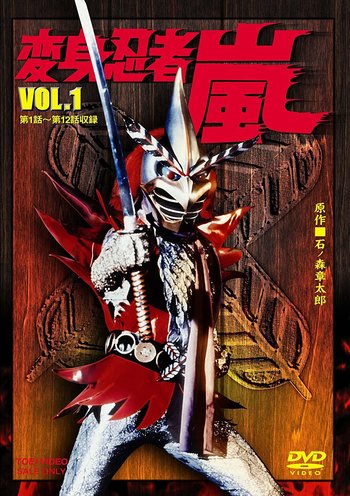 Arashi was made by Toei following the massive success of Kamen Rider and is best described as "Kamen Rider set in Feudal Japan". While not as long-lasting as its sister show, Arashi still enjoyed a great deal of success in its day thanks to its creative combining of the Toku and Jidaigeki genres. Later Kamen Rider shows (and their related franchises Super Sentai and Metal Heroes, particularly Sekai Ninja Sen Jiraiya) would go on to pay homage to Arashi in a number of ways, and before Kamen Rider Hibiki was decided to be a Kamen Rider show, one of the ideas for it in its early development stages was to be a revival of Arashi. Henshin Ninja Arashi also received a manga written by Shotaro Ishinomori that ran concurrently with the TV series, and was much Darker and Edgier, depicting Arashi as a ruthless and vengeful Anti-Hero rather than the do-gooder he was in the TV series. A second manga called Henshin Ninja Arashi: Shadow Storm would later be published in 2013, written by Hiroshi Izawa. This manga saw Hayate / Arashi with a personality much more in line with his Toku, and featured him being revived in modern day Japan.

Arashi and Hibiki would also meet in the 2013 Kamen Rider Hibiki novel, which saw Arashi teaming up with the Hibiki of the Edo period to fight evil.