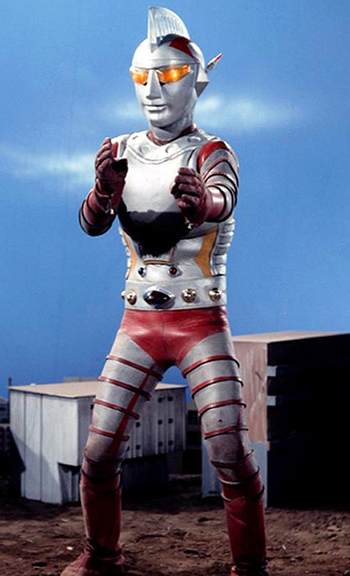 Jumborg Ace is a 1973 tokusatsu series by Tsuburaya Productions (a.k.a. the guys behind the Ultra Series) that ran for 50 episodes on Manichi Broadcasting System. It was one of three series created as part of Tsuburaya's tenth anniversary celebration alongside Fireman and Ultraman Taro.

Naoki Tachibana is just your everyday delivery plane pilot flying goods for his irritable boss Daisaku Banno. But one day, his older brother Shinya, commander of the anti-kaiju defense force Protective Attacking Team (PAT) is killed when malevolent aliens from the planet Groth send down a kaiju to conquer Earth. Naoki tries to avenge his brother's death, but stands no chance against the invaders' monster. But just as it seems his death is certain, he and his plane are teleported to the planet Emerald, where powerful aliens use advanced technology to modify Naoki's plane and wristwatch. Naoki is returned to Earth immediately afterwards, but discovers that by activating his watch and shouting the command "Jum-Fight!", his plane transforms into a gigantic robot superhero named Jumborg Ace, with Naoki himself piloting it. Now Naoki must battle against the forces of the Groth aliens, as they send new kaiju to conquer Earth and defeat Jumborg Ace once and for all. However, as the series progresses, new help comes on the way when the Emerald aliens send down a new robot called Jumborg 9, who transforms from Naoki's car to help Jumborg Ace battle the weekly attacks.

While having never achieved the degree of popularity that TsuPro's Ultra Series does, Jumborg Ace's dark tone and Humongous Mecha character helped it stand out from the many other Kyodai Hero series of its day. Also, in 1974, Tsuburaya collaborated with Thailand's Chaiyo Productions to create a movie called Jumborg Ace and Giant, which came out alongside Hanuman vs. 7 Ultraman. The film was never released in Japan though, and was later used by Chaiyo as part of their attempt to steal the distribution rights to the show (like what they had been doing with the Ultra Series). Later on, the Ultra Series movie, Ultraman Zero: The Revenge of Belial would homage this series with the introduction of a Jumborg Ace Expy named Jean-Bot. They would also later introduce a character named Jean-Nine, who homaged Jumborg 9.