I Am Not Left-Handed 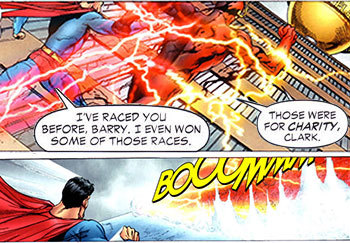 Superman had always figured that he and The Flash had the same level of Super Speed — until the Flash decided to stop powerwalking.
Inigo: I admit it: you are better than I am!
Man in Black: Then why are you smiling?
Inigo: Because I know something you don't know.
Man in Black: And what is that?
Inigo: I am not left-handed! [switches the sword to his right hand and starts driving him back]
— The Princess Bride
Advertisement:

When someone fights dirty by holding back, but now decides it's time to take it up a notch.

The situation varies from example to example. A common example is for a character to fight with their non-dominant hand, as in the trope-naming example, only to switch back to their dominant hand to gain an edge. Similar to this is pretending that they have a serious handicap, then deciding to stop the charade. It can also go so far as a character revealing that they have always had a superpower which they now decide to exploit, or a Dangerous Forbidden Technique which they now have no option but to utilize. They also may reveal they've been partaking in some Imposed Handicap Training and are ready to throw off their handicap. The most common subversions are for the other character to also be not left-handed, or for the character to remark, "Yes I am," after he switches hands. (Or if the writer is being subtle about doubling up on this trope, that the character is later revealed as ambidextrous a.k.a "both-handed".)

Villains can invoke this trope, as well. For more information on that, see our Analysis page.

Has a couple of sub-tropes:

May be preceded by a "No More Holding Back" Speech. Use of this trope, especially in sequence, can result in transfer of the Advantage Ball. See also: The Gloves Come Off, Restraining Bolt, Power Limiter, Willfully Weak, Just Toying with Them, Cherry Tapping, and Fake Weakness. Also compare Let's Get Dangerous!. Note that Forgot About His Powers is not this trope, as it has nothing to do with deliberately holding back for calculated reasons.

Augus only ever draws his blade against a worthy opponent.

Augus only ever draws his blade against a worthy opponent.