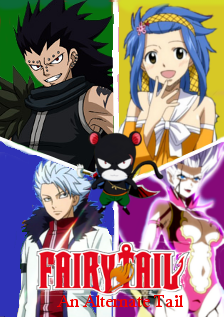 Our five main heroes
"Levy Mcgarden has always dreamed of joining the famous guild Fairy Tail. She never expected to join because of a rude Iron Dragon Slayer and his mysterious cat partner. She soon finds herself on a unique team of wizards on a never ending tail."
Advertisement:

Though initially a basic rehash at the start, Alternate Tail slowly but surely diverges from canon in its own Alternate Universe.

Two Stories have been written, each for the year they take place:

This page is currently under construction; any contributions are appreciated.