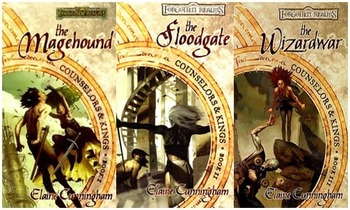 Counselors and Kings is a trilogy of Heroic Fantasy novels by Elaine Cunningham that take place in the nation of Halruaa in the Forgotten Realms setting. As Halruaa is aesthetically and geographically distinct from the rest of the Realms, however, only the magic system, gods, and some throwaway references really tie it in to the main setting and it largely functions as its own self-contained story.

The kingdom of Halruaa is ruled by an aristocracy of powerful wizards, kept in check by an elaborate system of laws, customs, and restrictions. These are protected by the Jordain Order, a specialized group of people specially bred to have peak human physical and mental abilities and almost total resistance to magical power. Loyal only to truth, Halruaa, and their wizard patrons, they generally function as advisers and aides to the most influential wizard-lords, and are the titular Counselors. An order of specialized wizards called Magehounds ensure the Jordaini's purity.

The story follows four main characters- Matteo and Andris, two young Jordain who are about to learn that the land they love and the Order they are a part of both hold darker secrets than they could imagine; Tzigone, a mysterious girl who possesses both the magical abilities of a wizard and the sharp mind and magic resistance of a Jordain, but is haunted by the ghosts of her Dark and Troubled Past; and Kiva, an embittered Magehound with a personal vendetta against the wizards of Halruaa and all they stand for. These four are bound together by the dark legacy of Akhlaur, the most powerful necromancer who ever lived and whose shadow lies on Halruaa even two centuries after his disappearance. At the same time, there are many who have come to believe that Halruaa's aged king, Zalathorm, is starting to lose his grip on his throne and his magic, while a handful (most notably Lord Procopio Septus) scheme to claim the throne for themselves.