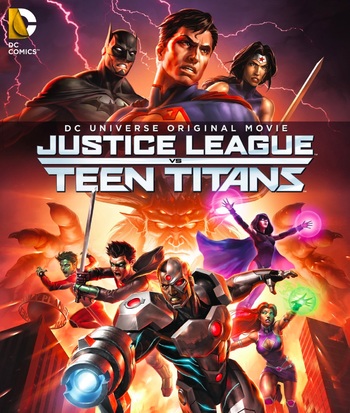 Justice League vs. Teen Titans is a 2016 movie of the DC Universe Animated Original Movies and part of the DC Animated Movie Universe. This movie marks the first appearance of the Teen Titans in this setting, as well as the villain Trigon.
Advertisement:

After numerous attempts at trying to rein him in, Batman, with the aid of the Justice League, has set up an intervention for the still-rebellious Damian Wayne - he is sent to join the Teen Titans, a group of super-powered teenagers who are trying to find their place in this super-powered world. Despite this, Damian's still being rebellious, refusing to really play nice with who he refers to as "kids". However, not everyone's all squeaky clean - one of the members, Raven, is haunted by the fact that her father, Trigon, is on his way to this plane and she is the key to bringing him here. When the League discovers this key piece of information, they come to spirit her away. However, that's something the kids are not willing to let happen. Can the two teams work together to save the day or will Trigon stomp all over everything?

This film reunites the Bat-cast and Justice League cast save for Green Lantern and introduces Taissa Farmiga as Raven, Jake T. Austin as Blue Beetle, Brandon Soo Hoo as Beast Boy, Kari Wahlgren as Starfire and Jon Bernthal as Trigon.

The film is available for streaming on Hulu