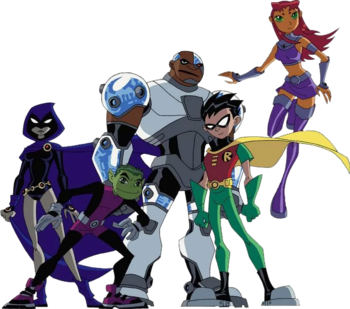 From their tower, they can see it all...note Left to right: Raven, Beast Boy, Cyborg, Robin, and Starfire.
"When there's trouble, you know who to call."
— Robinnote and Puffy AmiYumi in the theme song
Advertisement:

Based on the classic DC comic (mostly the 1980s incarnation by Marv Wolfman and George Perez, but with a lot of differences), with a generous dose of anime influence thrown in, Teen Titans (2003–2006) features the adventures of five young superheroes:

While their adventures are primarily episodic, each season includes an arc follows the most famous arcs of the comic book with some fidelity. Furthermore, in the last season, its arc not only introduces the majority of the classic characters from the comic but also the members and enemies of the allied superhero team, The Doom Patrol. Deathstroke appeared as the series' main antagonist, though he used his civilian name of "Slade" due to the executives thinking "Deathstroke" was inappropriate (which became redundant come the Young Justice adaptation). Other comic book villains such as Trigon, the Fearsome Five, and Mad Mod appeared, as did a number of original villains created for the show, such as Red X and Control Freak.

All five seasons of the show are available on DVD, Blu-ray and iTunes. The show has also returned in the form of chibi-fied shorts for Cartoon Network's DC Nation block in 2012, called, appropriately enough, New Teen Titans. Thanks to the success of these shorts, a new Super-Deformed, Denser and Wackier series titled Teen Titans Go! premiered as a part of the DC Nation block in 2013, with all of the original cast back as their respective characters. While popular with newer audiences, response to it among older, long-time fans of the characters has been... mixed.

that there is a chance this show could receive another season if Teen Titans Go! To the Movies was successful. However, the film’s moderate performance at the box office left this promise in doubt, with the Direct to Video movie Teen Titans Go! vs. Teen Titans so far being the only project involving the original series.

All episodes can be watched for free (with ads) on Cartoon Network's website,

provided you sign in with a cable provider. The TV episodes are available on the HBO Max streaming service with a subscription.

After being exposed to chemicals, Beast Boy became more aggressive in behavior. In this scene, his anger reaches its peak and as a result, he transforms into a giant, werewolf-like beast.

Example of:
Hulking Out

After being exposed to chemicals, Beast Boy became more aggressive in behavior. In this scene, his anger reaches its peak and as a result, he transforms into a giant, werewolf-like beast.