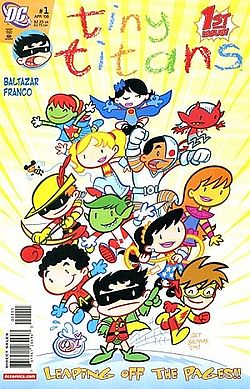 As the Teen Titans were to the Justice League, so the Tiny Titans are to them. A whole bunch of sidekicks and child characters in the DCU attend Sidekick City Elementary and get up to all kinds of hijinks — and hilarity absolutely does ensue.

The series started in April 2008 and ended in 2012 on its 50th issue. The same team are now working on a comic called Superman Family Adventures after a month gap. which includes a grown up Superboy and Supergirl alongside Superman. According to most of the fans, it was the only current ongoing Teen Titans comic that is actually good. As you can guess by this, it has picked up an obscenely large Periphery Demographic.

After a year's absence, Tiny Titans returned in 2014 right where it left off for a 6-issue limited series, Back to the Treehouse. The Tiny Titans had a cameo in the 2019 animated film Teen Titans Go! vs. Teen Titans.