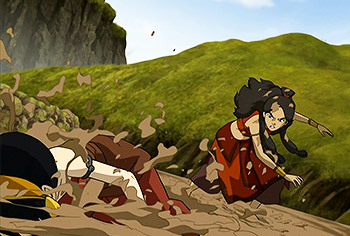 The debate devolved into mud-slinging. But we're not complaining!
"I mean look at this, it's just two women fighting each other, covered in mud... heaving their large breasted bodies onto each other, touching one another, rolling around..."
— The Nostalgia Critic starting to like this trope

There's something appealing about the idea of two attractive people fighting, which leads to the popularity of the Cat Fight, Wimp Fight and other related tropes. This trope takes that to the extreme by having the combatants grappling in mud. Despite its name, it doesn't have to be just mud; it can also be jello, pudding, or some other substance. The result is fanservice, unambiguous pandering, and....and...sorry, what were we talking about, again?

In pre-watershed programs, wrestling in the mud can also be used as a technique to make a fight look more visceral, without the actual spilling of blood. The image on the side is a good example of that.

Can result in Pass the Popcorn. Subtrope of Covered in Mud and Fanservice Faux Fight. Also tends to overlap with Slapstick Knows No Gender.