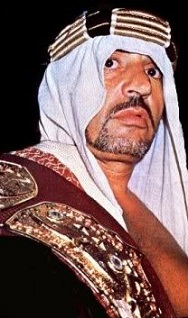 Edward George Farhat (June 9, 1924—January 18, 2003) was an American Army wrestler and soldier who turned Professional Wrestler, promoter and trainer after returning to civilian life. He resided in and first started achieving fame in Detroit, MI as The Sheik Of Araby. He started in the late 1940s and was a huge star from the 1950s through the 1970s. While best known for his work in Detroit, he was also a major name in Toronto, Japan and seemingly everywhere else he wrestled for decades, drawing money all over the place. Among his in-ring achievements, he was a 16-time NWA (Detroit) United States Heavyweight Champion

. In 1972, Pro Wrestling Illustrated named him "The Most Hated Wrestler," and he was also one of the most attacked wrestlers of all time, often suffering stabbings. Along with various National Wrestling Alliance territories, he competed for the WWWF, All Japan Pro Wrestling, FMW, the WWC in Puerto Rico and many independents. He was inducted into the Wrestling Observer Newsletter Hall of Fame in 1996 and into the WWE Hall of Fame posthumously in 2007.

Not to be confused with The Sheik, The Iron Sheik or with Sheik Adnan Al-Kaissie.