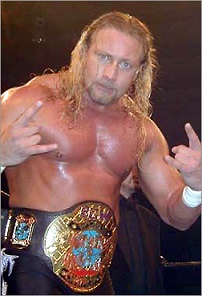 Jeremy Lynn (born June 12, 1963 Minneapolis, MN) is a retired American professional wrestler best known for his work in ECW from 1997 until the promotion closed in 2001. He debuted in 1988 and worked in various independents in the Midwest and as a TV Jobber for WWE. He first got noticed for his series with The Lightning Kid in the Dallas-based Global Wrestling Federation. WCW picked him up in 1995 as a masked jobber named "Mr. JL." While he was not pushed, he did get to make his PPV debut in a loss to Sabu at WCW Halloween Havoc 95. He debuted in ECW in September 1997 and went right into a feud with the debuting Justin Credible. His most high-profile work in ECW was his series with ECW World Heavyweight Champion

Rob Van Dam in 1999. While he never defeated Van Dam for that title, he did defeat Credible for the ECW World Heavyweight Title at ECW Anarchy Rulz 2000. After ECW closed, WWE brought him in and he debuted by defeating Crash Holly for the WWF World Light Heavyweight Title

. He lost the title to Jeff Hardy a little over a month later and WWE released him in February 2002. He would go on to TNA, where he would be one of the early stars of the X-Division. He has also competed for New Japan Pro-Wrestling, SMW, Ring of Honor, MLW, CHIKARA and many independent promotions.

In 2019, he became a producer for All Elite Wrestling.