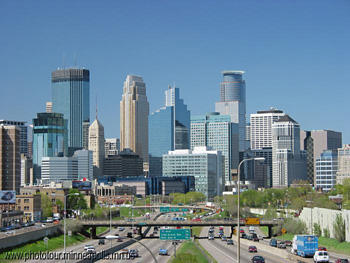 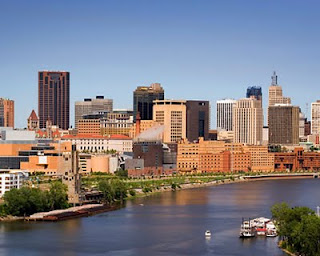 Saint Paul
"Hey, look at that. Twin Cities. That's the IDS Building, the big glass one. Tallest skyscraper in the Midwest — after the uh, Sears, in, uh, Chicago, or John Hancock Building, whatever."
—Carl Showalter, Fargo
Advertisement:

Minneapolis and Saint Paul are the Twin Cities of Minnesota. Minneapolis (the most populous city in the state) is situated on the western bank of the Mississippi River, while Saint Paul (the state capital and its second-largest city) sits directly opposite on the east bank. Minneapolis is the county seat of Hennepin County, while Saint Paul is the seat of Ramsey County. This is mildly important for people who live there.

The two cities, and their surrounding suburbs, are collectively known as "The Cities" by inhabitants of Minnesota and neighboring states. They essentially function as one large metropolitan area, hence the name "Twin Cities". However, both cities have distinctive cultures and personalities. Saint Paul is slightly smaller and viewed as friendly, clean, blue-collar, and family-oriented. Minneapolis is younger and trendier, and contains more of the Cities' art scene. Despite these differences, the two Cities do function as a single metro area.

Despite the Twin Cities' reputation for dowdy Midwesternness, the area is actually quite diverse. It is home to the largest Hmong and Somali populations in the United States (though you never seem to see them on TV). It's the 14th-largest US media market, has the second-highest number of theatre seats per capita of any metro area in the country, ranks eighth on the list of metropolitan areas with the largest percentage of LGBT residents (with Minneapolis itself fourth on the list of top cities), and has one of the five biggest concentrations of neopagans in the US (the others being San Francisco, New Orleans, New York City, and Salem, Massachusetts), earning it the nickname "Paganistan". But again, not something you'd hear every day.

Perhaps its most famous landmark is the Mall of America in the suburb of Bloomington, the second-largest indoor mall in the US and the most visited mall in the world. The mall's popularity is helped by only being a couple of miles away from Minneapolis-St Paul International Airport, and just a few stops away by light rail, so it is not at all uncommon for people to fly in just to go shopping. Major companies based in the area include industrial conglomerate 3M (their name is a shortened version of the Minnesota Mining and Manufacturing Company -- which has three "M"s), retailers Target (a spinoff of the now-defunct Minneapolis department store Dayton's) and Best Buy, UnitedHealthcare, and General Mills, among others.

Many musicians are from or got their start there, including Prince and his associates, Bob Dylan, The Replacements, Soul Asylum, and Hüsker Dü. A number of Speculative Fiction authors also live in or near the Twin Cities, including Neil Gaiman, Lois McMaster Bujold, Patricia C. Wrede, and screenwriter Diablo Cody.

Twin Cities residents eat a lot of ice cream, and outdoor cooking is also extremely popular. The region is also known for a particular form of cheeseburger with the cheese cooked into the middle of two patties that have been crimped together. It's called a Jucy Lucy (or Juicy Lucy) and after a long time of being the exclusive product of a pair of working-class South Minneapolis bars (the 5-8 Club and Matt's Bar), it's finally started to develop a nationwide reputation, one that was enhanced in 2014 when President Barack Obama visited Matt's for a burger.

Two of the four area teams in the "Big Four" leagues — the Twins and Vikings — have all of their division rivals in the Midwest, and the area's NHL team, the Wild, have two rivals in the Midwest, allowing these teams to develop intense divisional rivalries - indeed, both the NFC North and the NHL Central are referred to as "Black and Blue" divisions. Only the Timberwolves do not have any Midwestern division rivals, though some fans probably want their team moved into the Central Division, which might happen based on where the NBA places its next expansion teams.