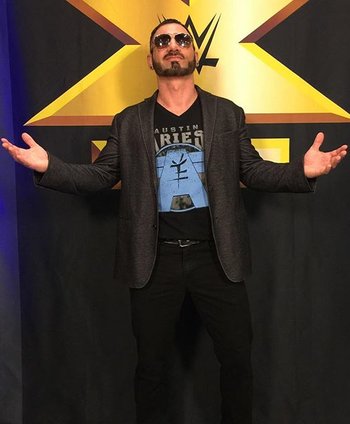 The Greatest Man That Ever Lived
Advertisement:

Daniel Healy Solwold Jr. (born April 15, 1978) is an American professional wrestler better known by his ring name, Austin Aries. He trained under Eddie Sharkey and Terry Fox and made his professional debut on November 11, 2000.

He is best known for his time in TNA where he has been a TNA World, Tag Team and X-Division champion. On June 27, 2015, he lost a match to Rockstar Spud and was forced to leave TNA; in reality, his contract expired and he made the decision not to renew it. He would then return to ROH. In January 2016, he would officially sign with WWE, before asking and being granted his release in July 2017. On December 2017 he joined Defiant Wrestling for 6 months and is 1x Defiant World Title champion.

Before coming to TNA, Aries was the first wrestler to be a two-time ROH World Heavyweight Champion

"The Greatest Tropes That Ever Lived"