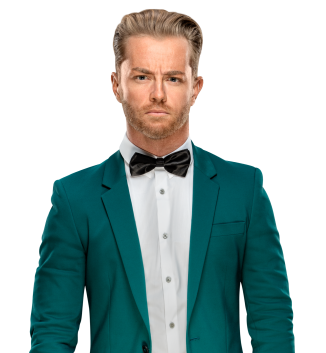 James Michael Curtin (born January 30, 1983 at Birmingham, UK) is a professional wrestler known for his run in TNA/Impact Wrestling as Rockstar Spud. He's also known for his tenure at WWE, where he performed on the Raw brand and was the General Manager of the cruiserweight branch, 205 Live, under the ring name Drake Maverick.

He arrived on TNA on 2012, taking part on TNA's British Boot Camp, and winning the competition, earning a spot on the roster. Then he went to compete in the X-Division championship tournament before being sent to OVW, TNA's developmental brand, where he became 1x OVW Television Champion. Back on TNA, he became Dixie Carter's chief of staff for a time before winning the X-Division championship twice. Afterwards he was given the role of ring announcer until his departure in 2017.

After his work visa was renewed, he signed a deal with the WWE, debuting as the GM of 205 Live in January 30, 2018. In the main roster he also managed the Tag Team AOP (Akam/Rezar) as well as taking part on the 24/7 Championship skits. He was 6-time 24/7 champion at the promotion. Unfortunately, his career at the promotion was cut short when budget cuts imposed by management resulted in Maverick getting released from his contract, along with dozens of other WWE wrestlers and personnel. Despite the release, he still participated in the WWE Interim Cruiserweight Championship Tournament in NXT where he maded all the way to the final before losing to El Hijo del Fantasma. Afterwards, he was given a new contract.