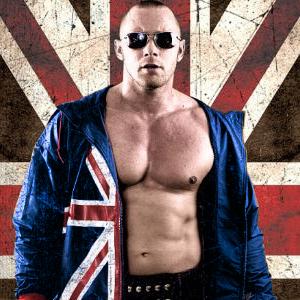 Read my lips: I am the ONLY thing!
Advertisement:

Steven Haworth (born 23 January 1976) is an English professional wrestler who launched his wrestling career in the United States of America. Prior to his beginnings as a wrestler, he relocated to the United States in the middle of his university education, graduating from Kent State University in 1997 with a degree in chemistry. In September 1998 he began training under Les Thatcher at WCW's farm league, the Heartland Wrestling Association, having his first match in September 1999—and thus, Nigel McGuinness was born.

Though he continued to wrestle for HWA for the next year, he wound up incurring debts to the point he had to go back to his native England to work two full-time jobs and raise money, then return to the US to resume his career.

Wrestling for companies such as HWA and All Star Promotions when he returned in 2001, he developed "a punk rock soccer hooligan" gimmick. Making his way up in the ranks and earning championships along the way, it would only be a matter of time before he was signed up by the company which eventually became his wrestling home: Ring of Honor.

Debuting in August of 2003 with a win over Chet Jablonsky, Nigel's climb through ROH was one of gradual success, initially jobbing, then forming a short-lived tag team and feud with Colt Cabana, before challenging and eventually beating Samoa Joe for the ROH Pure Championship belt

two years later, all the while seen as a face. After winning the title he turned heel and began developing clever heel gimmicks such as using a Union Jack-covered clothing iron as a weapon and getting opponents counted out through various unfair methods to keep the championship. This eventually landed him in a series of matches with ROH World Heavyweight Champion

Bryan Danielson over the two championships, which eventually concluded in Danielson winning the feud to unify both titles and retire the Pure Championship. Having earned Danielson's respect through the matches, Nigel got to keep the latter belt as an honorary trophy, cementing him back as a face.

The next year would see McGuinness in feuds against Jimmy Rave and Chris Hero, and in a role as the spokesperson of Japanese promotion Pro Wrestling NOAH within ROH. During this time he challenged the ROH World Champion, NOAH's Takeshi Morishima, on several occasions before finally beating him for the title at Undeniable in October 2007. Though his title reign was soon marred by a series of injuries limiting his amount of action, he eventually found his footing again after turning heel again to defend the championship against Danielson in January by targeting his injured head. His title reign lasted over a year and a half, through defenses against the likes of Austin Aries, Kevin Steen, Tyler Black, Claudio Castagnoli, Jerry Lynn, Roderick Strong, and El Generico, and Kenta, before finally dropping to Lynn at Supercard of Honor IV in April 2009.

A few injuries, a principle agreement with World Wrestling Entertainment, and a failed physical screening later, he wound up leaving ROH for Total Nonstop Action Wrestling, who he'd previously wrestled for in a one-off battle royal in 2004.

His arrival in TNA came with the new ring name Desmond Wolfe and a feud with Kurt Angle, who'd just turned face following a two-year stint as the company's Big Bad. Wolfe punked out Angle repeatedly heading into their battles, but ultimately lost when it counted, though the matches were highly acclaimed and Wolfe was established as a dangerous player even in defeat. However, a combination of his health issues and the political turnaround of the company due to the 2010 arrival of Hulk Hogan and Eric Bischoff resulted in his eventual downgrade in importance, going from one of the top heels to a hopeful member of Fortune to a short-lived tag team with Magnus called "London Brawling" to being outright Put on a Bus. With 2011 came teases from compatriots Magnus and Douglas Williams and a brief return as the Xplosion Commissioner, but nothing came of either role and he was eventually released.

He would go back to Ring of Honor as a color commentator, as well as compete on the independent circuit for a two-month retirement tour in which used both the Nigel McGuinness and Desmond Wolfe ring names. The final years of his wrestling career, including this retirement, were on a documentary called The Last of McGuinness, in which he confirmed that he'd tested positive for hepatitis B during his TNA tenure and advocated for the end of blading in wrestling. Upon Jim Cornette's departure in September 2012, he was named the new on-screen "matchmaker" of ROH in addition to his color commentary duties, a role he maintained until December 2016, when he signed with WWE as an announcer, debuting at their WWE United Kingdom Championship Tournament on January 2017 and replacing Corey Graves as the NXT color commentator.

He's also become an assistant film producer and editor outside of wrestling, as well as developed a Kickstarter creative project called L.A. Fights, a scripted show about an upstart amateur fighting league. Unfortunately, it failed to get funded